I have had several instances in which I posted something on social media and someone, zealous in their endeavor to prove themselves to have a superior moral compass, superior theological ideologies, or superior political views, turned my post into a warzone. I’ve had friends who didn’t even know each other hollering at each other on my posts in an effort to prove me or one another wrong. (Full disclosure: If someone turns my posts into a warzone, I change my privacy settings so that person can’t see anything I post. It’s not because I can’t handle opposing views. I simply believe that if you can’t be gracious when discussing your disagreement…. You know, that scripture about speaking with the tongues of men and angels….. You can speak with all sorts of eloquence, but if you don’t do it with love, you’re a clanging gong. No one wants to hear it.) I’ve had strangers beat me up on social media because someone I respect eats meat, and because I had the audacity to suggest that emotional trauma can sometimes manifest in gender dysphoria and because I suggested that when it comes to the color of one’s skin, what is more important than the color of one’s skin is the ability to connect on a human level with everyone, regardless of their skin color.*

Social media gives people a soapbox (coupled with the protection of distance and anonymity) on which to boldly declare their own superiority and everyone else’ inferiority.

Because when it comes down to it, we’re all just people. We’re not colors. We’re not political parties. We’re not races. We’re not theological beliefs. We’re not agendas. We represent those things at times. But before any of those things, we are people. Can we please just treat one another like we’re people, void of agendas and void of an internal sense of smugness about our own correctness and everyone else’ incorrectness?

I haven’t written much in the past few years because I feel that I have to self-censor so much that it just isn’t worth it to try. People’s pet agendas and social justice warrior stances make it impossible for people to own their own stories, their own convictions and their own experiences. If I tell my story, home school advocates come against me because “that’s not the way it is.” If I tell my story, faithful people everywhere get offended because “church is a hospital for the broken.” (Spoiler alert: It’s supposed to be, but it often fails miserably.) If I tell my story, therapists tell me that I suffer from a weird cognitive dissonance or some kind of denial because all that stuff is true, but it hasn’t destroyed my faith and it hasn’t made me disown my family.

Can we simply listen? Can we listen to hear, instead of listening to develop an argument? Can we respond with compassion and grace and generosity and understanding? Can we throw agendas to the side and embrace people simply because they are people, instead of quantifying them (or ourselves!) with adjectives that divide us into “white people” or “Christian people” or “Asian people” or “Atheists” or “educated people” or “Progressive people” or “Republicans” or “Socialists”? We are just people. The minute we started dividing ourselves by our adjectives, we started a subtle war that will never end until we decide that Ariel being a redhead means nothing because life isn’t about people’s differences. It’s about finding similarities in the midst of our differences. It’s about teaching our children to find something in people who are opposite from ourselves that we can appreciate and even understand. Life isn’t about forcing the world to conform to our demands. It’s about finding the very subtle similarities that are present in even the most opposite individuals. Life is about teaching children that there is more in the world and more to life than just our own selves, our own experiences and our own prejudices.

Let’s learn to be kind again.

*Regarding race and color: I want to make it very, very clear that I have utmost respect for people of all races, colors, and ethnicities. There are many people of many races and ethnicities that I love and adore. I do not in any way wish to minimize the struggles that anyone has had pertaining to their race, color or ethnicity, because I know that many have been marginalized and treated very unfairly and many suffer greatly due to attitudes and events of the past that still impact them and their families many generations later. I am only saying that a little bit of openness to others who have different experiences, and understanding that our experiences are different and that’s ok (and yet, in spite of our differences, there is similarity somewhere), will get us a long way in our endeavor to create a kind and compassionate society.

30 Things to Accomplish in my 30s:
#27. Visit Ireland. And Iran. And India. And Iraq. And maybe even Afghanistan. I want to go to Ireland because I’ve always been fascinated with the beauty, and I want to go to the other countries because I feel so much compassion for the women and girls who are in bondage because of religion and culture.

This illustrates why this hasn’t happened yet:

And, here is a solution to this problem:

(I didn’t say it was a good solution!)

A serious look at the feasibility of international travel: 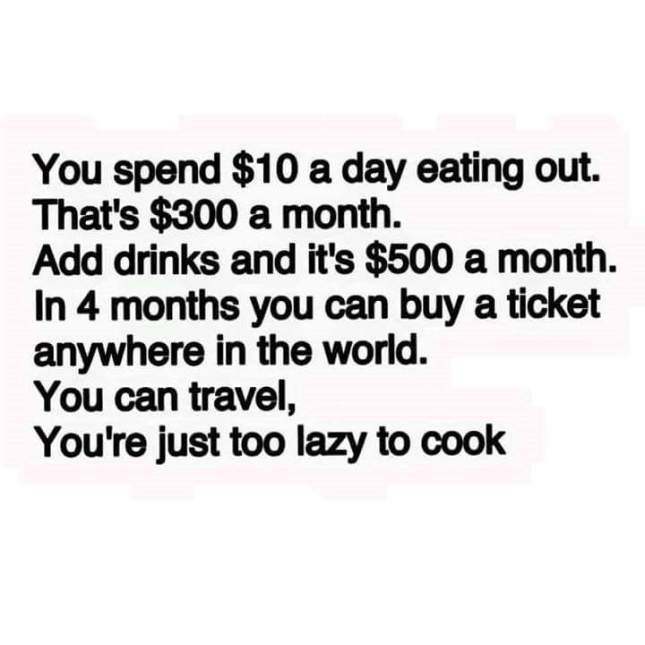 For me, it would be slower going than that because I only spend $10 or more on a meal maybe 3 times a year. I never get drinks and I don’t think I’ve ever had more than 4 meals out in any given 7-day period, unless I was traveling.

But, if I cut those 1-4 weekly meals out, I might be able to save enough for a ticket somewhere once a year. Maybe.

At any rate…. I’ve been thinking about why I listed the countries I did.

When I wrote the original list, ISIS hadn’t become a thing yet.

I’m not as daring today as I was then.

My heart still breaks for the mamas and the little girls in those countries who are property, not people. My heart aches for the young boys who are brainwashed into believing that blowing themselves up is somehow a good idea. I weep for the mothers who have to watch their babies train for suicide missions.

It’s so wrong on so many levels.

So, no, I haven’t traveled. I won’t get to the Middle East any time soon. I may never go anywhere. Who knows what will happen?

Now, to commence with the eating at home thing so I can go to Canada so I can check out the Hot Springs and see Aurora Borealis.

I’m sure you’ve heard today’s biggest news on religion in the U.S. military.

I, myself, have heard several versions of this story from several sources, some of which said this was now a law and some of which credited President Obama for coming up with this new “law.” I found this article very informative.

The following paragraph from the article explains why the people who came up with this idea think it is necessary:
“Leaders at all levels,” the document says, “must avoid the actual or apparent use of their position to promote their personal religious beliefs to their subordinates or to extend preferential treatment for any religion.” It even suggested that noncompliance could result in court-martial.

Is this not the case in just about every civilian job there is? If I were to force my beliefs on someone at my job, I’d be fired.

This article also discusses fundamentalist “Christian” zealots who go around saying things like “You’re going to hell” or one of my personal favorites, “God loves dead soldiers.” (Ok, so you’re probably not going to hear that from a military person, but I just wanted to give an example of fundie thought processes.) I want to point out that there is a vast difference between fundamentalist “Christians” and people who truly love Jesus and want to serve Him. Fundamentalist “Christians” don’t understand the concept of speaking in love, nor do they understand that their personal calling is NOT to be the Holy Spirit. They feel that their faith gives them the freedom to hate. What they don’t understand is that if you’re going to be a TRUE Christian, you MUST lay down your right to offense. You must behave and speak in loving ways. You must follow the example of Jesus if you’re going to call yourself a Christian.

I believe that the military is beginning to understand the link between fundamentalism and hatred and destruction — both when it comes to people who call themselves “Christians” and subscribe to a hateful theology, AND when it comes to radical Muslims — or any other religious group for that matter.
Please understand that I say this out of my own experience with fundamentalism and radical religious ideas. I know for a fact that fundamentalist groups of “Christian” people use fear to manipulate and control people. They spread lies and rumors. Their aim is to destroy. They may not physically harm someone, but they mentally and emotionally torture those who don’t agree with them, with the intent to break people of their ability to reason. They may not physically kill another person, but the ideas they present — and the ways they present them — can lead to such confusion and pain that it is possible that a victim of such torture could find comfort only in their own death.

How do I know this? Because I’ve experienced it. I know the pain these radical “Christian” people can inflict. I know the lies that are spoken. I know the ways they manipulate. I know the drastic consequences of their actions.

But, fortunately for me, I also know the Truth. I know Jesus. The difference is that I’ve taken the time to really read the New Testament. I’ve let it soak in. I’ve studied Jesus. I’ve studied the verbs of Jesus. I’ve taken the time to figure out what Jesus is all about. The operative word for a true Christian is love. Absolutely everything a true Christian says and does should be said or done out of a spirit of love. When the fundie zealots of the day brought a prostitute to Jesus, He spoke authoritatively — yet kindly. He saw her as a person. He saw her apart from her sin. Even though Jesus is God (and therefore, completely free to judge the sin), He chose to see, instead, a person. He chose to see a woman. A woman who had sinned, but who had sinned because of things she didn’t have much control over. He chose to see a human — one who was plagued by her humanness, just as every other human throughout time has been plagued. He chose to look on her with compassion because He saw that she was merely human. And He asked her accusers to compare themselves to her. He was saying, “Wait a minute. Think about it. Which one of you is TRULY more righteous than she? Which one of you is completely without sin? Which one of you is qualified to make that judgement?” They couldn’t answer. Only HE had the right to judge her — and yet He chose not to.

As far as I’m concerned, anyone who behaves like Jesus did will be perfectly safe from the threat of court martial.

I say, Onward, Christian soldiers! Keep fighting the good fight. Keep loving the brothers and sisters in your company. Keep being Jesus to the people around you.

Sharing my learnings of being a mother

In the Write Moment

Stretching out to touch His hem with 6 kids in tow:)

Just a few things I've been thinking about....